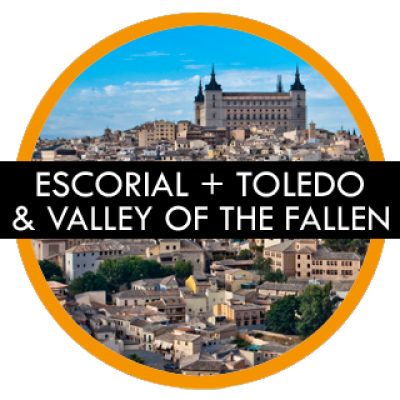 City Gay Tours offers this combined full day tour including half day excursion to Escorial and Valley of the Fallen in the morning, and half day to Toledo in the afternoon. The bus could go via Madrid or directly to Toledo. (Tours must be made the same day).

Visit the Monastery of El Escorial built under the reign of King Philip II to be a Residence for the Spanish Kings, Monastery and Pantheon of the Royal Family. The Valley of the Fallen is a monument built as a memorial of those who died during the Spanish Civil War in 1936. This impressive work has a colossal cross over 150 mts. high, and the Basilica and Crypt excavated in the hard rock under the mountain.

Toledo is located one hour drive from Madrid. The city is like an immense museum of great beauty and holds some of the most genuine Historical Spanish monuments. Its old gothic and renaissance buildings, its narrow streets and alleys, testify old days of magnificence. The old city has been considered as a National Monument, and declared World Heritage City by UNESCO. Toledo is also named the city of Three Cultures, as for a long period of time, the Christian, Islamic and Jewish lived peacefully within its walls.

Daily Departures except Mondays at 09’00h all year round

Valley of the Fallen

Fill in this form with your prefered date. We can not guarantee this availability but we will do as much as we can to achieve it.

This website uses cookies to improve your experience while you navigate through the website. Out of these, the cookies that are categorized as necessary are stored on your browser as they are essential for the working of basic functionalities of the website. We also use third-party cookies that help us analyze and understand how you use this website. These cookies will be stored in your browser only with your consent. You also have the option to opt-out of these cookies. But opting out of some of these cookies may affect your browsing experience.
Necessary Always Enabled

Any cookies that may not be particularly necessary for the website to function and is used specifically to collect user personal data via analytics, ads, other embedded contents are termed as non-necessary cookies. It is mandatory to procure user consent prior to running these cookies on your website.